ΣΥΝ is more than an organization. For me it is the epitome of womanhood and an example of women reaching beyond the different personalities and becoming exactly what Sigma set out to do ~ form a sisterhood of true sisters. Cleopatra Kellman (Big Sister Everlast)

I’v been in game since April 2008, my first SL job was a host then manager of one of the oldest Jazz Clubs on the grid called Phat Catz. After being there for a while I left and took as the sim manager for Hot Tropics. During that time I joined PhiRe – a sorority of about 30 women and became one of the recruiters for that organization. In 2009 with my sister, Angel McMullen we started the Red Door which encompassed several boutiques, the Red Door venue, a poetry lounge, the Red Door Modeling Agency, Fierce-In-Fashion Magazine and real estate for a total of three years. In 2010 my tenure with PhiRe came to an end and in April of that year I became one of the co-founders of Sigma Upsilon Nu, SL Sorority.

In RL I am a mother, currently in the process of obtaining my masters in Marketing. I reside in Atlanta and work full time as a Senior QA Specialist. I am also co-owner of AllNiteRadio.com an internet radio station. My SL existence consists of my two daughters Cashmere Kellman and MsPhilly Zepp, my two sisters Angel McMullen and Eve Parnell and the mission of our Sorority.

Soror Name & Line Information: Being a founder, I did not have to pledge but I was given the name Big Sister Everlast because I never stop until a task is done and done as close to perfection as possible.

What does sisterhood mean to you? Sisterhood to me means being able to deliver tough love when you see your sister in need – it is being true to your sister even when it is not the most popular decision. It is uplifting, it is loving, it is caring. Sisterhood is means being able to feel comfortable expressing yourself without feeling embarrassed or ashamed to do so because it is understood that we don’t have to always agree but it is always have to respect each other.

What is your fondest memory of to date of being a Soror of SuN? My fondest memory is when we started Sigma and how many women trusted us as founders to give them a place they can proudly represent..

What type of Role play you do if any in SL? I roleplayed at owning a club LOL.

What is your pet peeve in SL?: My pet peeve is the same as RL – people who are deceiving and without loyalty.

When you listen to music what is the first genre you choose? R&B and Neo-Soul. Love House as well!

Who is your favorite recording artist? I have a few – Ledisi, Jill Scott, Nina Simone, AverySunshine, Patti LaBelle….just to name a few

What is your favorite television show? Law & Order and Scandal

What do you do for fun in SL? SHOP SHOP & SHOP. I also enjoy hanging out with my Family when I get a chance.

Do you follow sports what is your favorite sport and team? I know sports but don’t follow as I use to. But I am a hardcore NY fan – so the Knicks & Giants but I will shout for the Ravens (I love Ray Ray)

If you had to plan your last meal, what would it be? Seafood feast!

You just had the bad day what do you do to relax? Peppermint Bubble Bath with candles and Franken Scent and Myrrh fragrances burning

If you had a special super power what be and how would you use it. I would have the ability to project emotions or any emotions, feelings, consciousness onto another and make them real – I would use them on people who haven’t yet realized how their actions hurt others. 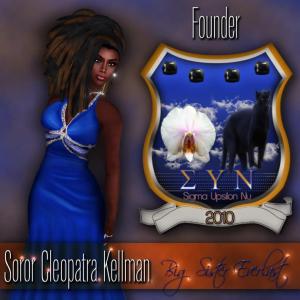 The Mission of ΣΥΝ